What types of skin drop are there?

Don’t Starve Together offers a lot of different skins. Skins do not give you a game advantage, there are only responsible for customizing your character and your items. Furthermore, we have categorized the possible skin drops into 4 categories.

As the name suggests, you can pick up a daily skin drop every day. You can redeem the drop each day when you start the game for the first time. These drops are the worst drops because they very often offer bad rarity. Nevertheless, it is sometimes very useful to pick up these drops, as there may be a low probability that a good item can be included. 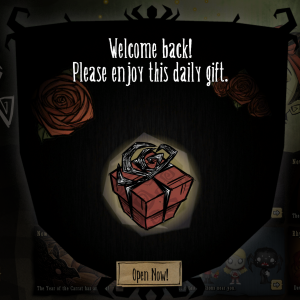 Drops you get while playing Don’t Starve Together

This list resets from Tuesday to Wednesday. So it is also possible to get 8 skins from Monday to Friday. If you want the maximum amount of skins per week, you should play 17 hours per week.

Event skin drops can only be obtained temporarily at certain times. This is often only 1 day. Even skins have the rarity loyal. In addition, these skins are not tradable. They should rather show how actively you play the Don’t Starve Together. Event skins are often droped at certain times, such as Christmas or Easter. But also when a new big update comes out.

You get Twitch skin drops while linking your Steam account with your Klei forum account. Furthermore, you should link your Klei forum account with your Twitch account. You can get Twitch skin drops by watching Don’t Starve Together streams on Twitch. Often there are 3 skins per topic that are changed after a certain amount of time.

More Don’t Starve Together content can be found here.

Here you find a german version on haton.net